ANOTHER BUILDING COLLAPSES IN LAGOS STATE.

A 3 – Storey building collapsed in the early hours of today at the Oye Sonuga street on Isolo road, Palm Avenue in the Mushin area of Lagos.

South West coordinator, National Emergency Management Agency NEMA, Ibrahim Farinloye, while on a chat with Raypower confirmed the incident and revealed that rescue operations are currently ongoing at the site.

So far, there have been two people rescued from the rubble, an adult and a child, and it is unclear if there are other persons still trapped inside.

Farinloye said the collapsed structure used as a nightclub located between a four building block of several flats was said to have started caving in from the underground of the building.

It was also confirmed that the Lagos S 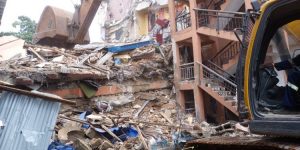 tate Emergency Management Agency LASEMA was on the site of the building collapse to help with rescue efforts.