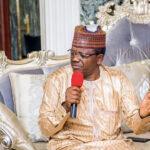 Zamfara State government is negotiating with abductors of Government Girls Science Secondary School, Jangebe, pupils through repentant bandits.
Governor Bello Matawalle spoke in Gusau the state capital, yesterday, when he received a presidential delegation on a sympathy visit over last Friday’s abduction of 317 schoolgirls.
Matawalle, who has been in dialogue with bandits in the state, in spite of the criticism of his action, maintained that his administration would “continue with the peace process with bandits considering its impact in addressing security challenges facing the state.”
The state recently granted amnesty to some bandits that came out of the forest and handed in their arms. They were then classified as “repentant bandits”.
Governor Matawalle commended President Muhammadu Buhari for sending the delegation to symphathise with the state over what he has described as “ugly act”.
The delegation was led by Minister of Aviation Hadi Sirika.