Some leaders in Nigeria’s oil-producing areas have expressed dissatisfaction over the imbalance of the construction and rehabilitation of 21 federal road projects between the North and South regions of the country.

The Federal Government had allotted 621 billion Naira for road intervention around the country.

Expressing their dissatisfaction in Yenagoa, Bayelsa State, they stressed that the federal government’s decisions were unfair, to the region that has been laying the golden egg for the nation.

The group expressed dismay at the exclusion of some vital federal road projects in the region.

The leaders also joined other notable Nigerians to condemn the recent attack on the Abuja residence of Justice Mary Odili by security agents and called on the Federal Government to thoroughly investigate the matter and bring the culprits to book to avoid a reoccurrence. 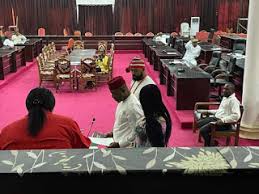